Apparently, they call it Brizzle.

Signals’ annual outing to the Bristol HiFi Show used to be a relaxed affair. We would close up for the weekend, take wife / girlfriend / partner, whatever the terminology, and have a jolly break in a nice hotel with a splendid meal in one of Bristol’s innumerable eateries.  What went wrong? We got busy and ended up with aged parents that need folks to be around!

Saturday 22nd was an unusually frantic day that culminated in Andy and me viewing a potential customers building site after hours in the gloom. Departing early on Sunday was therefore doubly harsh and, to add an extra twist, we decided to do it in our fairly recent acquisition, a (leased) all electric Jaguar i-Pace car.

Oh and there were three of us this time. Andy, me and our new recruit, but long time customer and collaborator, Mick Dann. I will introduce Mick properly soon, but quite a few customers already know him. Mick’s rather green-minded and has what I now realise is a gently persuasive manner. He’s pretty much why we are in an electric car.

The car started off showing an encouraging range of 263 miles. Weather was not terribly cold but certainly far from warm. Very windy and quite wet, though.

By the time we reached South Mimms services on the M25, it felt like a good time for coffee, some food and an electrical charge. The Ecotricity 50kw charger was available and, amazingly, was on free vend too. A short stop got us to 70% charge and we made the decision to move on at this point, since Bristol seemed to be within possible range.

By the time we had reached the M4, it was pretty evident that the Jag’s guess-o-meter tells fibs. Bristol was becoming a little too tight for comfort. Another top-up would make sense. Into Chieveley Services this time, simply to find that the week old Zapmap report of an issue was correct : Ecotricity machine was not working. On to Membury where, thankfully, the 50Kw machine was OK. We charged for just the time it took to queue for coffee and get it consumed. This turned out to be 70% again. Final leg, parking at 11:10, about 40 minutes later than hoped.

The NCP car park next to the Marriott has 7kw destination chargers and all four bays were free. A full charge was estimated at taking about 12 hours. Instant realisation that, had we waited ten minutes longer at the first, free, stop, we would have been able to leave Bristol with a full ‘tank’.

For the return leg, we decided to retrace the Membury – South Mimms sequence. Weather was much kinder, traffic slower and energy consumption lower. Mick and Andy swapped seats and Mick took charge of his half of the climate. He likes it cool, Andy does warm. Me too. We had an automotive weather front.

Membury went well but, stupidly, we settled for 70% again and this made the discovery of a Nissan Leaf on ‘our’ bay at South Mimms really frustrating. This brought a lot of frantic searching on both Apple and Google maps via the same carplay connection (who knew?) and Mick the keyboard warrior frantically inputting what seemed like mission impossible code.

Result? A nifty plan to eat at a posh hotel with a charger in the Essex countryside. Sadly, we were thwarted by a non-English speaking Leaf driver who was parking just as we arrived. As far as we can tell, looking on Zapmap, he never managed to get charged anyway despite the machine working an hour or so earlier.

Thank goodness for a 150Kw Polar charger near Chelmsford. The macDonalds meal was our penalty but, my goodness, super fast charging is great!

Beyond all this, this the Jag is a lovely thing to travel in and very easy and precise to drive. Qobuz through Carplay on the standard fit Meridian branded system sounds surprisingly good. Better than some of the stuff at the show, in fact.

Oh yes, in the middle of all this, there was this show!

As ever, we spent more time chatting than doing proper listening.

Downstairs, we saw the new PMC Twenty5i series but actually heard the Martin Logans. The changes to the ‘i’s are a different soft dome tweeter, different cross-over frequency (it’s at 1.6k instead of 1.8k) and addition of mechanical isolation to the bases. There are some styling changes to the rear panel too. Tom Barron described it as lots of incremental changes, as was cited by British cycling, bringing optimisation rather than fundamental change. Best not make any drug jokes at this point. 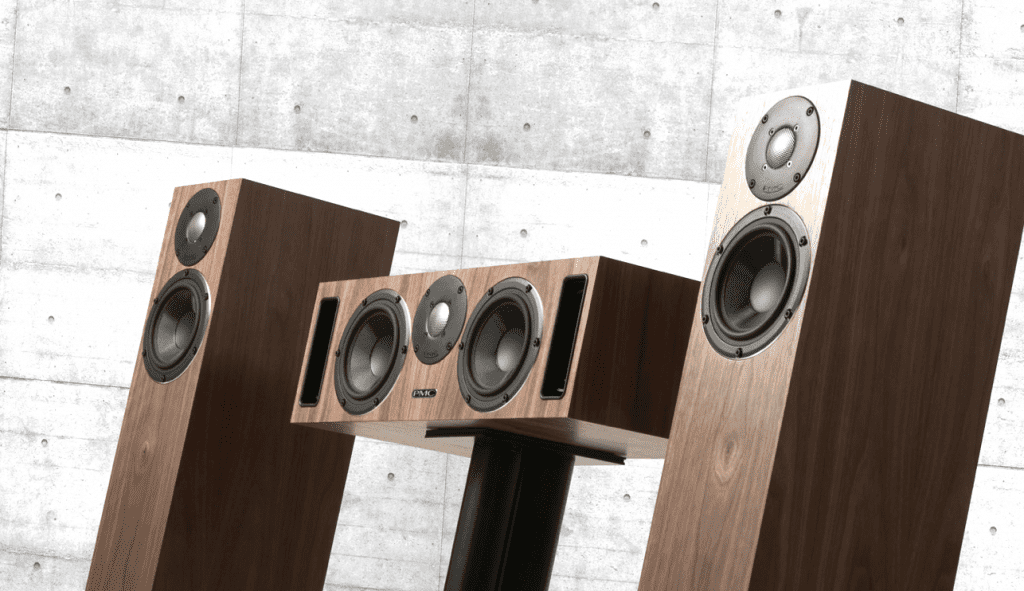 The isolation bases may well be offered as a retro-fit upgrade, but the tweeter + crossover change is not going to be available as retro-fit. We should get to hear the new models in the next few weeks. Prices go up a little, the new models have yet to begin production and quite a few of us have existing demonstration twenty 5 series speakers to sell. Ours are all in oak. 🙂 Expect deals!

Next door, Chord were making an utterly delightful sound, certainly while we were there, with passive ATC 50s being fed from the new Ultima Preamp / stereo power amplifier combo. They were running an Innuos server into the Dave DAC via the M Scaler. At the moment, we have SCM 40s in both active and passive form, perhaps one of them should give way to the 50’s. We already have the Ultima electronics and have been very impressed by them. The 50s and 100s are really well matched to them. Great to catch up with Maurice Tryner and Doug Graham. Colin Pratt had left, which probably explains the chilled music!

Nearby, we ran into another of ‘our’ brands; Dynaudio. Do we sell everything these days? Confidence 50s (I think) were running on Naim 555 / 552 / 300 system. Very nice, very familiar if, perhaps a smidgin more ‘up front’ than we’re used to but impossible to fault. Melco were just a few steps away, perhaps we should introduce . . .

Roland Hoffmann, who hosted our Dynaudio day last year was around but out of sight. Bill Livingston introduced us to Otto Jørgensen, their Customer Care Manager. Interesting chat with him, oh yes, a chat!

As with the other suppliers, we have enough day to day interaction with Alan and Dan at Melco to know what they had on show. The new EX software has definitely brought the leap in searching through music that many have wanted. It could make Roon compatibility less of an issue, although it’s, apparently, virtually here. We’ve been talking about it for so long, I’ve forgotten what it is. 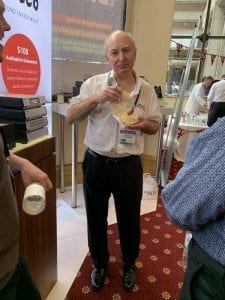 On the mezzanine level, Naim had the Statement amplification running into Focal Scala Utopia Evos . Enigmatically, the, presumably, ND555 source was hidden from view. Having become used to the space, they had taken some time to get the asymmetrical room tuned this year and the results, with the speakers allegedly sitting on wheels, was really rather good. Maybe it was the music choice, because I’ve read some fairly negative comments. More likely it was warm up. Statement takes ages. Trust us, we know!

We spent some time chatting with Jason Gould, Mark Raggett and Mike Heath. Had some lunch in the restaurant and noticed that the pricing seemed very reasonable. Better still, Mark paid! Thank you.

Upstairs, Kudos were playing a radical active combination of Naim components that Naim would not have thought to put together. Neither, it must be said, would we. XDX / Supernait 3 / Hi Cap / SNAXO with Hi Cap  and a NAP 250 into the quite chunky Kudos Titan 707s. Is this a mullet? 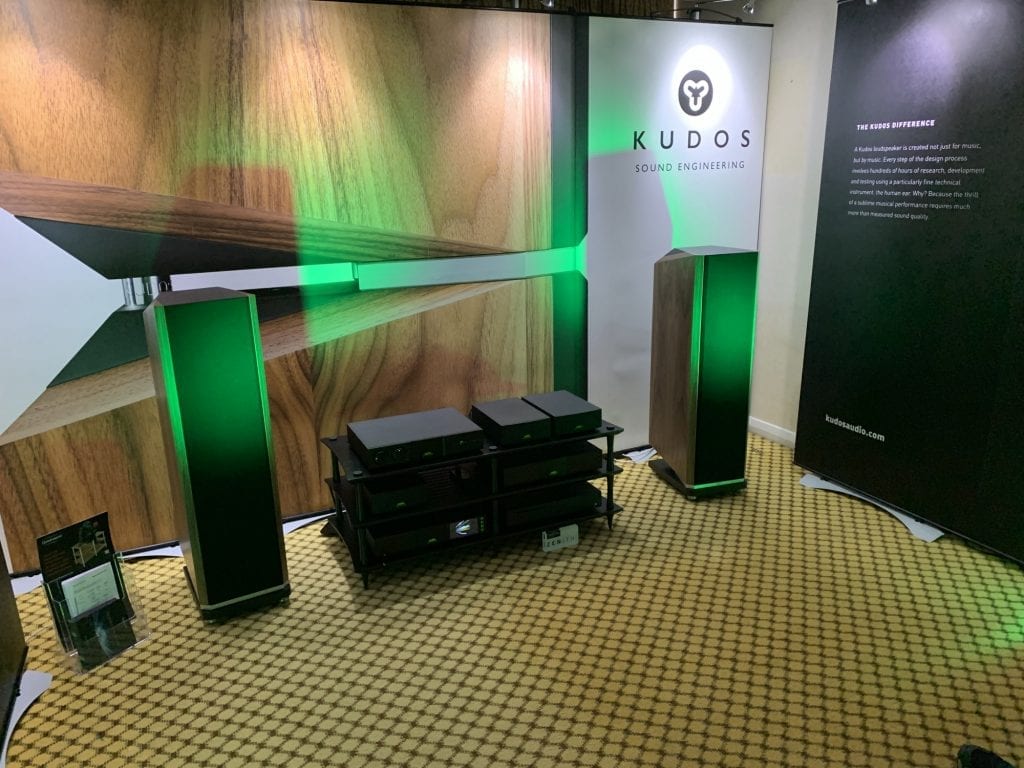 In good old Naim style, the more powerful, superior, NAP250DR was used to feed the tweeter, supernait to bass. Apparently, they experimented to be sure. Speaker cables in use were the new Kudos ones. We have some of these but have yet to try them out. Oops.

It sounded excellent. Very ‘easy’ and unforced, which is an active system characteristic.

ATCs own room was nearby and the passive SCM 40s with additional active sub woofer were sounding excellent too on some meaty classical music. It was fairly busy in both rooms, so we mainly hung around the doorway.

Bass fiends were catered for with structure-challenging demonstrations from REL (eight S/812s stacked four high in stereo) and SVS who seemed to be playing the sound of the building actually collapsing. All this and coronavirus to consider too.

So used to finding subs in use this year, I was gob smacked to find that Spendor’s Classic series speakers were delivering their thunderous sound unaided. Apparently, a Rega Aethos was involved.

In Falcon’s room, Primare was being used with a Mobile Fidelity turntable to demonstrate the speakers. Not sure what was going on in there, it seemed like a lock-in that involved two stacks of four 3/5a’s and some taller Revolver? speakers. Certainly curious! 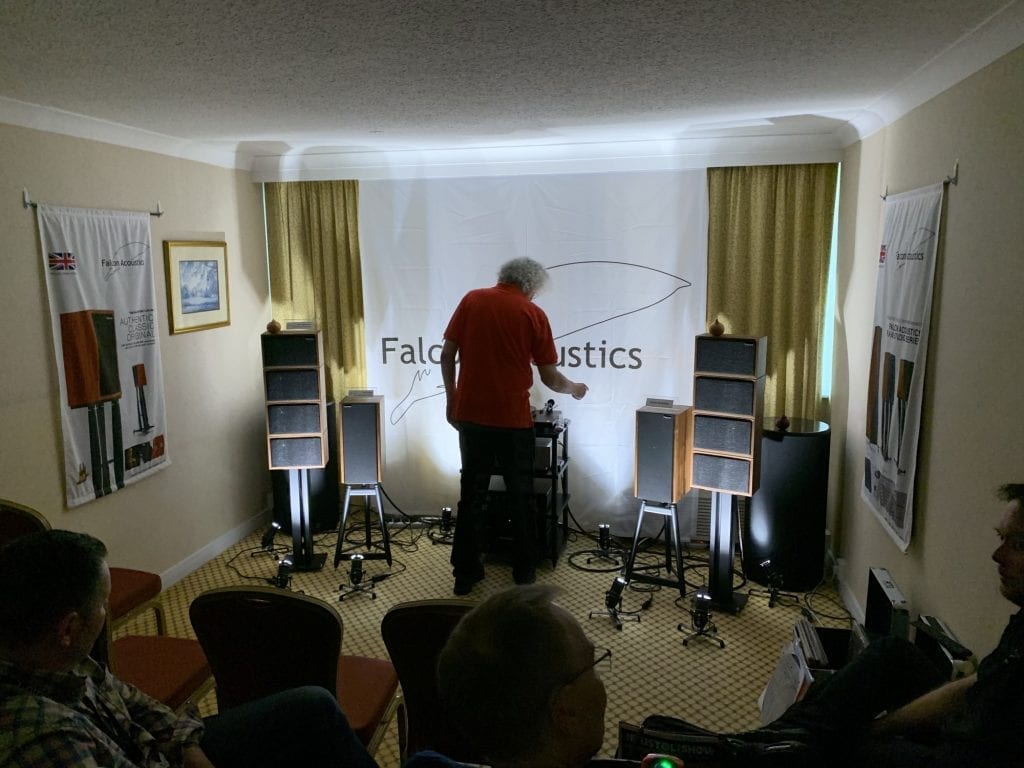 Rega were showing their new baby  amplifier and the accompanying loudspeakers. The latter with cabinets of phenolic resin. The package deal is £999 with 3m pair of speaker cables and the Planar 1 deck. Stands extra. They will probably be in black to match the speakers, though. Why white? It matches the cabinet. Of course . . . 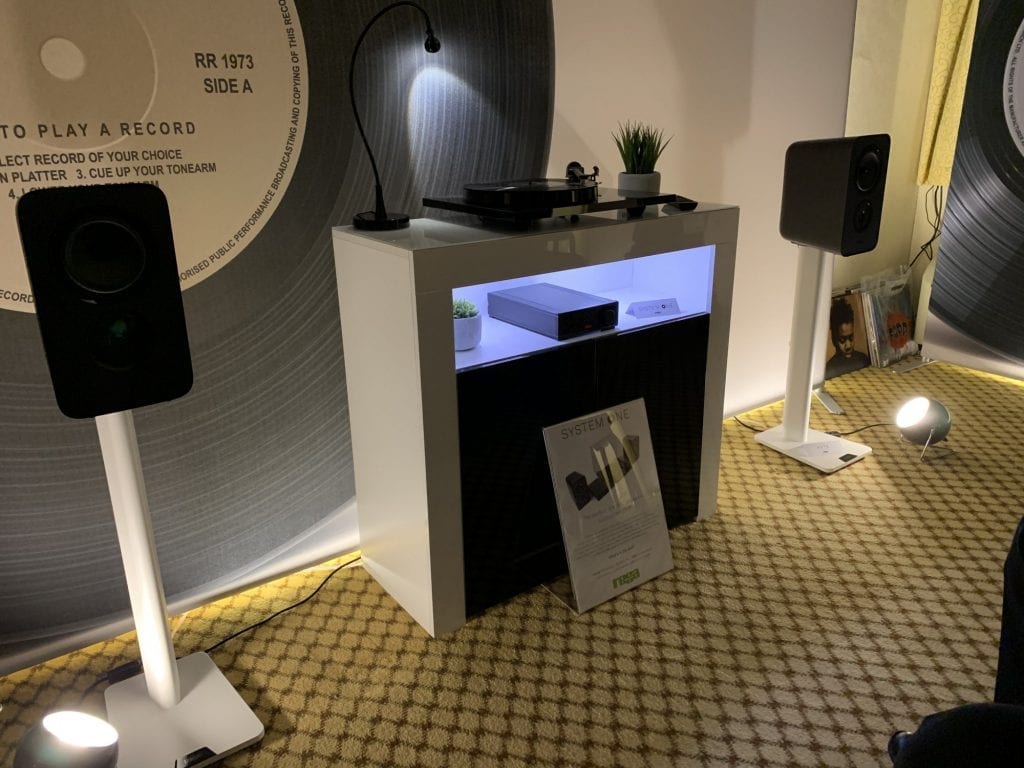 Nice to catch up, too, with Andy Moore of Mian who seemed to have his Solid Steel stands and racks working to good effect in lots of rooms. As mentioned earlier, Rega seeded their Ethos amplifiers into a number of locations, including Russell K. We were unable to catch up with the man himself (he was in the corner of a tightly packed room) but he was running the Rega kit into the Red 120s. The sardine like audience spacing seems to indicate that it was going down well.

No headache, possibly for the first time. So off to he car park.

What? Two i-Paces? No originality (same grey) but the other one has larger, cooler wheels.

If I think of anything I’ve missed I’ll add it later. Sorry about all the car guff. I like to paint a picture and, on that subject, Bristol is graffiti central: