30th and 31st August saw the latest in our series of ‘Audio Show East Lite’ open days. This time, the electronics were an unusually large part of the deal since we were demonstrating the difference between powering the speakers passively, with a single power amplifier and doing it actively, with the crossover between preamp and multiple power amps.

The long awaited arrival of Naim’s SNAXO for Kudos was the catalyst for the event taking place, after all.

With this being the third big loudspeaker demonstration event this summer, we had a few listeners who had become quite familiar with our slightly unusual venue and were in full comparison mode. Despite Kudos being the smallest manufacturer, this one actually had the largest turn-out. As a micro business ourselves, we rather like this!

To avoid crowds (don’t mock) we set up five separate sessions on Eventbrite, three on Friday, two on Saturday, and limited the availability of tickets to 15 per session. Rather surprisingly, we got close to filling all but one of the sessions and actually did run out of space for two of them. 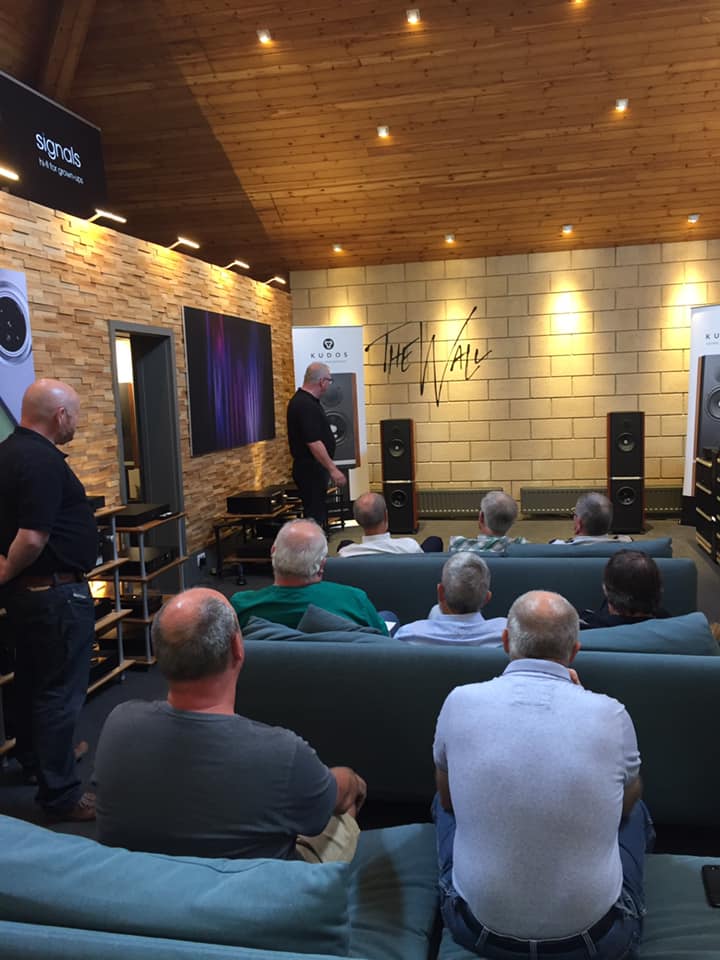 Ironically, the Saturday afternoon session was the lightest on numbers but probably also the one with the most positive de-mob happy  ‘vibe’.

We set up the big room with Kudos Titan 808s driven by three NAP500 DR power amplifiers. This was fronted by a Melco N10 two box music server, twin 555DR power supplied Naim ND555 music player and Naim S1 statement preamplifier. The SNAXO crossover was fed by Supercap DR and full fraim was used, as was a full set of SuperLumina cables and Naim powerlines. We used the Musicworks reference G3 mains block with the peek upgrade*.

*more about this later.

After slumming it in the morning with a Naim NDX2, the second room had another Melco, Naim ND555 with 555PS DR, NAC552, Supercap fed SNAXO and a pair of NAP 300s. G3 power block and Powerlines took care of mains, but standard HiLine interconnect, snaics and NAC-A 5 speaker cables. We used the slightly smaller Titan 707 loudspeakers.

The smallest room had the smallest system: NDX2, XPS DR, NAC 252 fed via Supercap DR, SNAXO fed via HiCap DR. In here, despite needing only two power amps, we had three NAP 250 DRs, making active / passive swaps particularly easy. Speakers started as Titan 505 stand-mounts but for some reason ended up being the 606 floor-standers by the time customers rolled up. As with the 707s, we used standard cables, including powerline lite and yet another G3 block fed by the sole proper powerline.

Friday morning. On to the first session. With an almost full house, we started with the full on super system. After a fair amount of playing, we broke the group up and started sessions in the two ‘normal’ rooms. This went well, with the comparison between active and passive on the smallest system being in absolute no-brainer territory.

There was a down-side, though, and a number of customers pointed out the blindingly obvious flaw, namely that everything after the big system sounded a little underwhelming.

Thereafter, we experimented with various techniques at leaving the best until last whilst not having too many people board out of their sculls waiting. By the final session on the Saturday, I think we were getting it about right!

The arrival of an additional ND555 on the Friday improved sessions 2 onwards in the 707 room. We also got brave and started demonstrating active versus passive on all systems, even though the transition is a little slow for the systems without a spare power amplifier.

Huge thanks to Derek, Dave and Toby from Kudos for their sterling efforts in set up and in running the various demonstrations. Thanks too, to the customers who ventured along. Without you, the food waste would have been criminal! 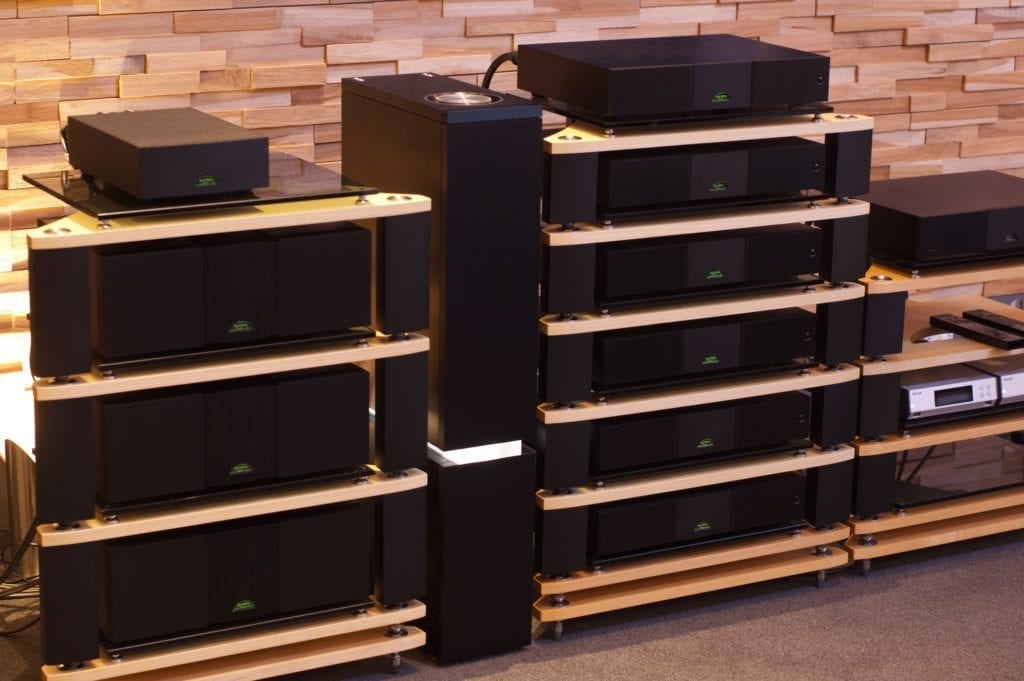 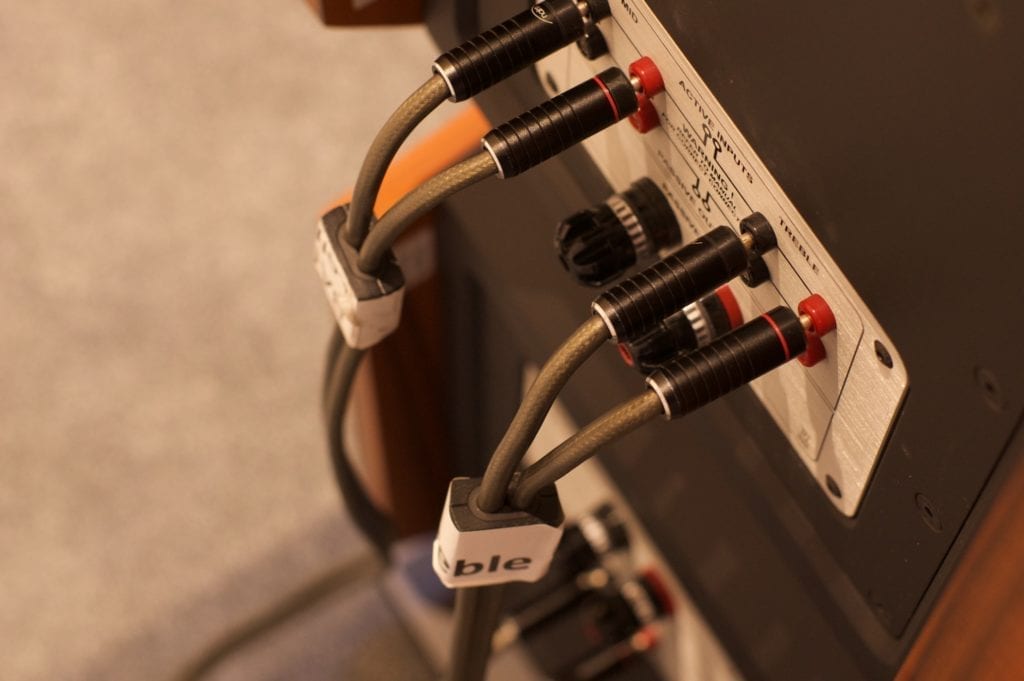 Slightly disturbing, really. For a start, our belief that the Titans were a little too small for the 7m tall big space when driven passively was patently not true. A number of changes have happened in terms of room damping, mains management and, of course, source quality, since we last made this judgment. They were also positioned slightly closer to the wall and closer together than we found to work before. This was Derek’s (Kudos’ supremo) influence.

In fact, speaker placements throughout were much closer to the walls than where we and Kudos have tended to use in the past.

There is no question in our minds that Titan 808s driven by 3 x NAP 500s in active configuration are unequivocally better than when driven passively by a single pair of S1 power amps. Despite the T808s being the least expensive of our ‘big room’ speakers, we were getting results that are up there with the very best. Andy and I were, and remain, deeply impressed.

I should say that we had opinions expressed by listeners that put every one of the various brands loudspeakers in ‘best’ category, so it’s also a matter of taste. Overall, though, this elicited the most enthusiastic reaction that we’ve had.

Years ago, I remember thinking that Naim SL2s driven actively by NAP300s were bettered by the passive NAP 500 arrangement. It could, I guess, have been an unwillingness to spend out that influenced the judgement. This time, it’s probably fair to say that we have not allowed cost to stand in our way!

For existing Kudos owners, we know that interest has been piqued. For potential ones, this unusual upgrade path brings some reassurance. Active operation has been available to Linn and Devialet owners for some time, with the cross-over being handled digitally.

a more general-purpose analogue cross-over is becoming available via Kudos from Exposure. This will allow any make of electronics to be used in this way.

I know that some will be coming here to see pictures. We completely failed to photograph the 606 and 707s in final situation.  Truth is that, as you can see, it’s a wee bit boring anyway: 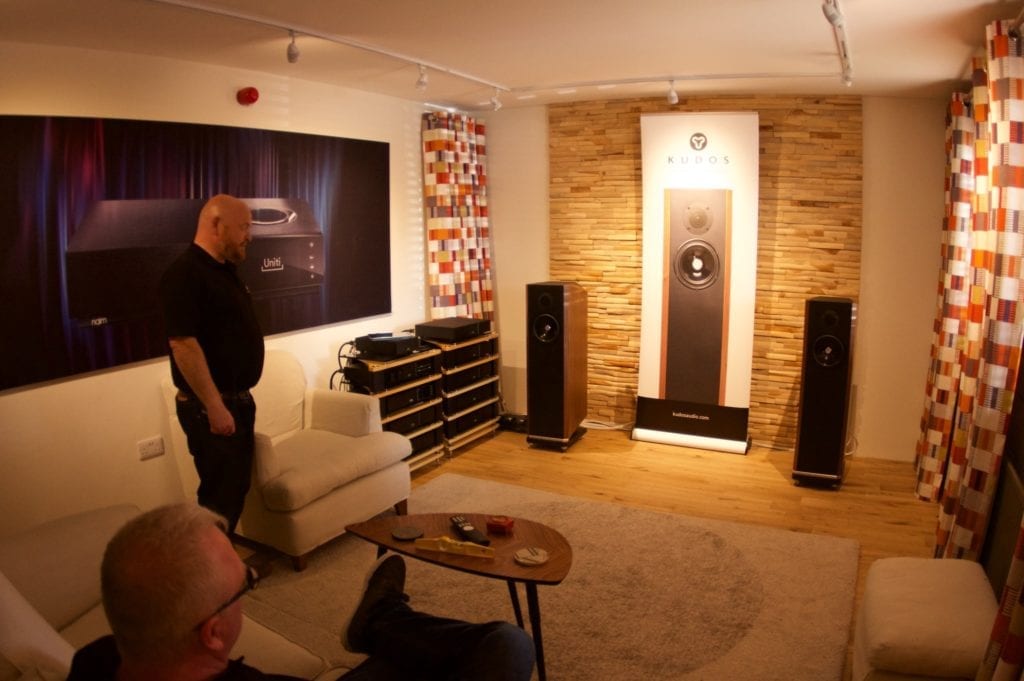 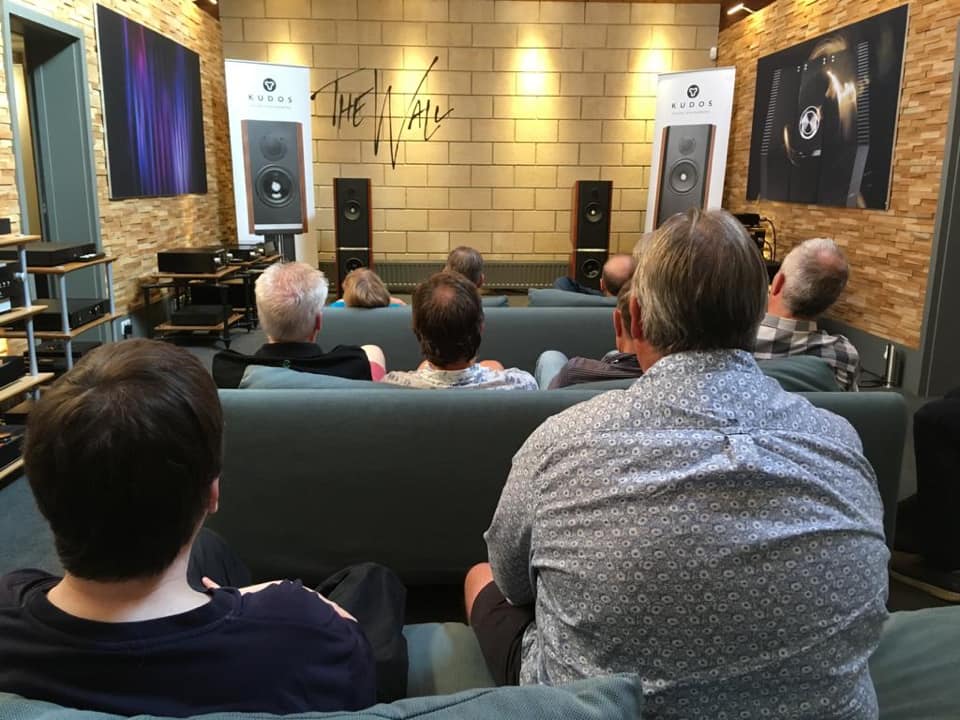 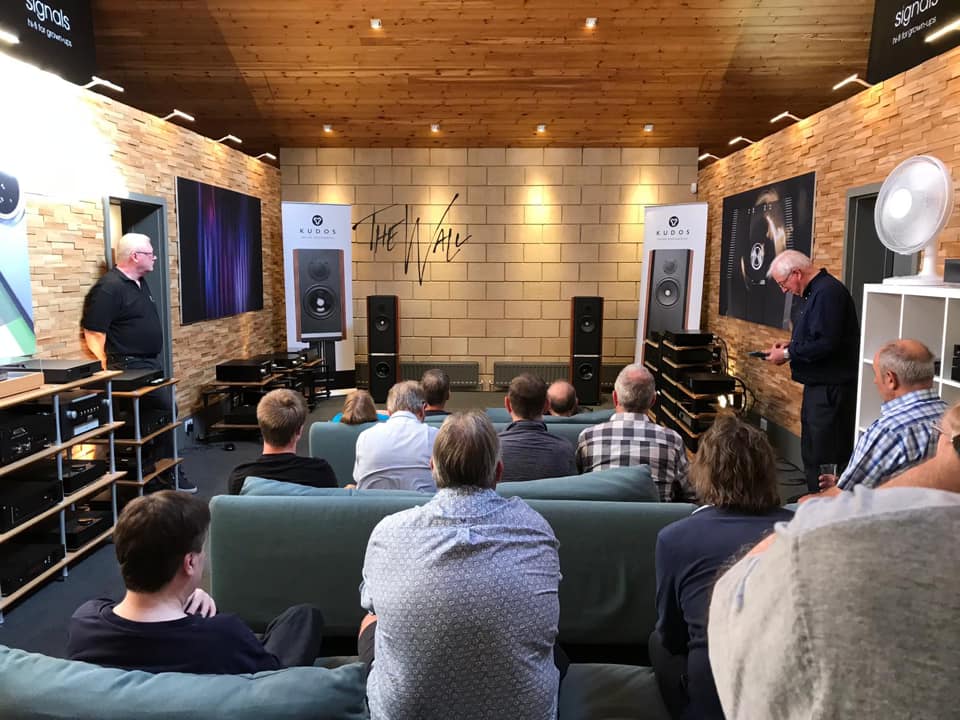 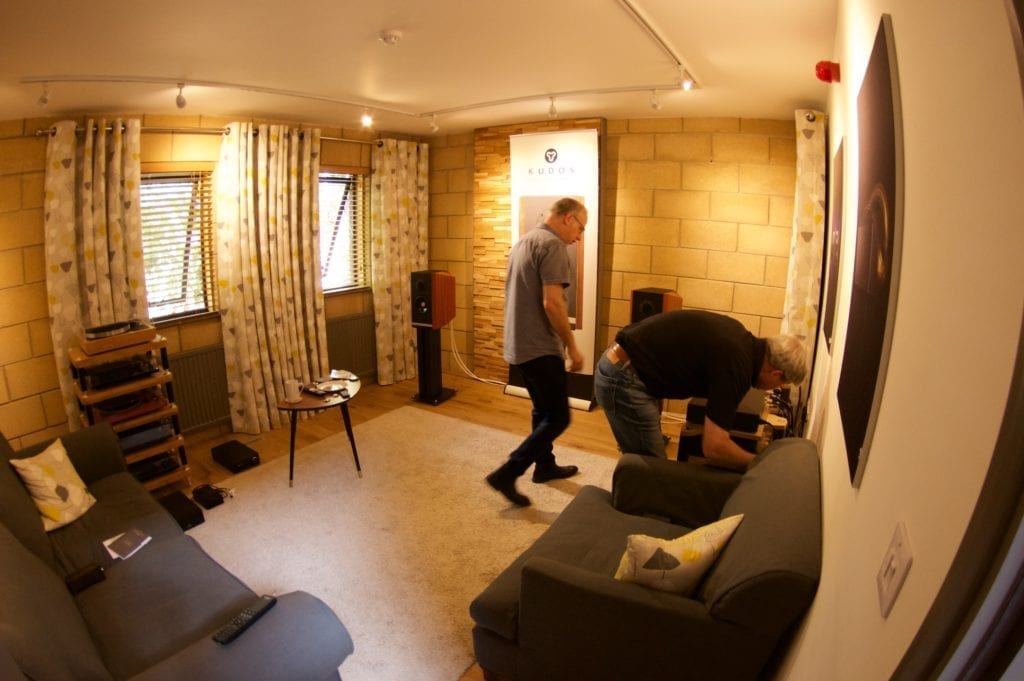 There have been references to the Musicworks G3 mains block and to the “peek’ upgrade.

The block itself is an improbably effective very straightforward 6 way mains distribution block. On the face of it, the ultimate example of snake oil. Trouble is, perfectly sane people are consistently blown away by the improvements that it brings.

The latest development is a base board replacement, best performed by the dealer, which replaces the lower sheet of acrylic with one loaded with speckles of peek (Polyether ether ketone). Peek is used for the feet of the block and simply swapping standard acrylic for this composite material brings a very obvious and positive change.

We tried little discs of this material between the fraim glass and the feet of components and were less impressed, but it sure as he’ll did ‘stuff’.

Anyway, the upgrade costs £300 and this is the same price differential of the pre-built peek block against standard, so no cost penalty for early adopters.

We used the peek loaded block for the big system and our slightly infamous customer, the one ‘for whom flies stamp their feet’ registered that something was different. . . and good! 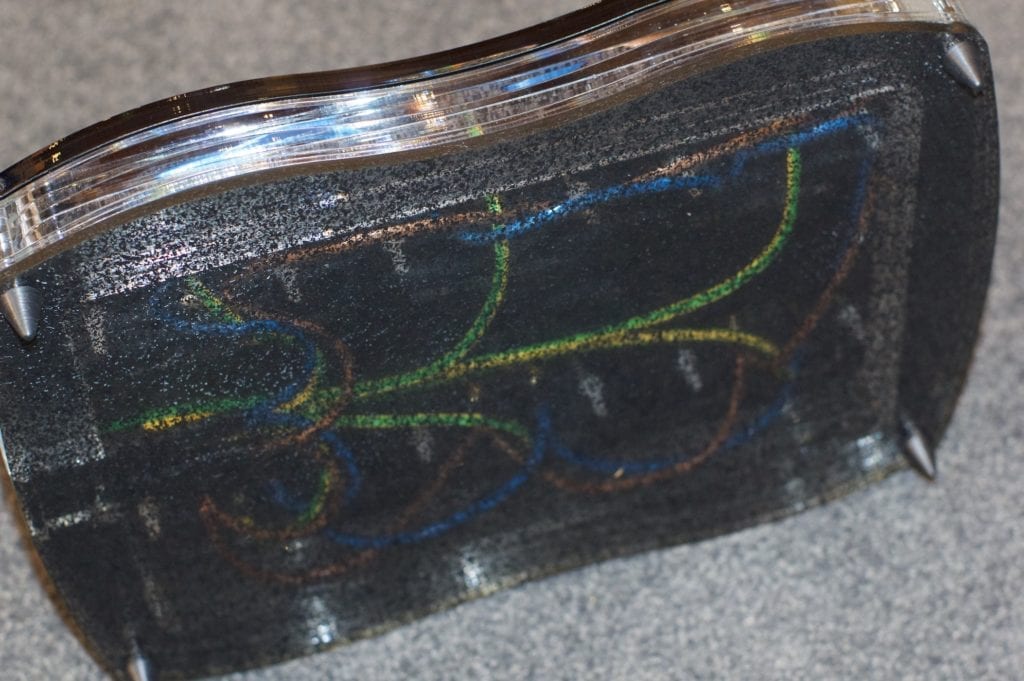