We were honoured to have PMC founder Peter Thomas along with Keith Tong and the amiable but redoubtable Tom Barron.

So that was five of us. It covers tracks nicely if no-one shows! 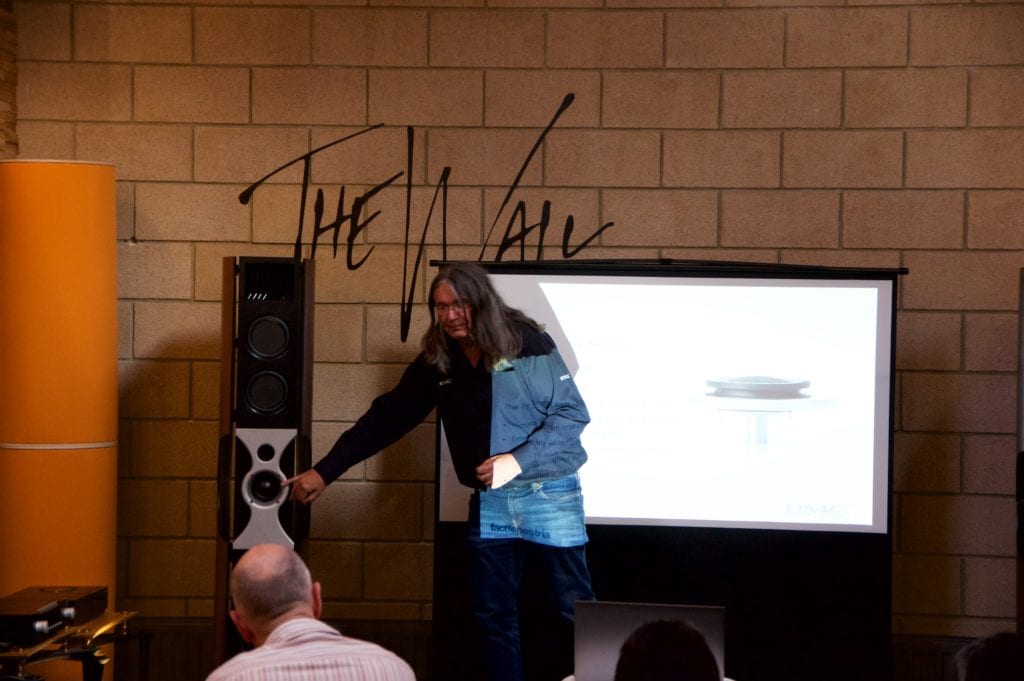 The event was split into two sessions, afternoon and evening with the greater number being able to make the evening part. Thanks to all for giving up their time to be with us, even if you were entertained and fed 🙂

The PMC guys really know how to tell their story and whilst a powerpoint presentation would normally strike terror, Keith, Tom and Peter managed to engage the audience and convey both the PMC story and the blue sky thinking behind the fenestrias. 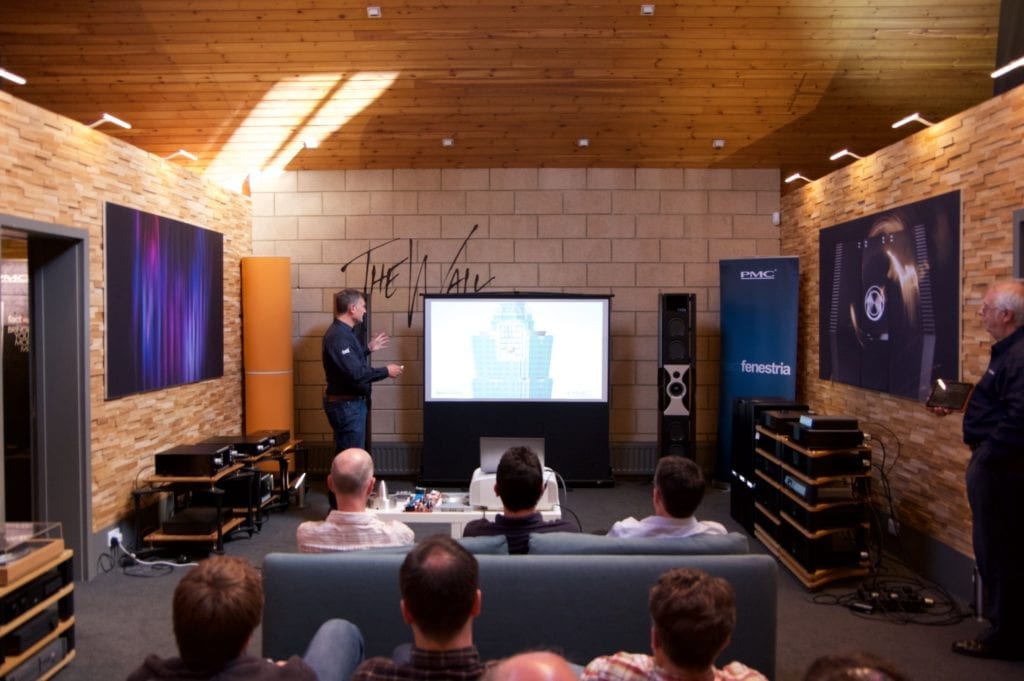 It’s not often that you hear customers saying appreciatively ‘so that’s why they’re quite expensive’.

After the descriptions, they started playing some music on the Naim ND 555-fronted Statement system, the same music was available in two adjacent  ‘living rooms’ with Melco and Chord sources feeding identical PMC Cor amplifiers. To show the epic bass extension, some James Blake was in the impressively varied playlist. We hope to get the building reconstruction underway quite soon 🙂

Whilst the Naim Statement / fenestria system is very familiar to us, the new Signature Edition fact 8 and 12 loudspeakers were not. Just to confuse regular visitors, we’ve recently been playing with the positioning of the fenestrias. As they’ve run-in, have found them increasingly happy working closer to the back wall than the initial set-up. 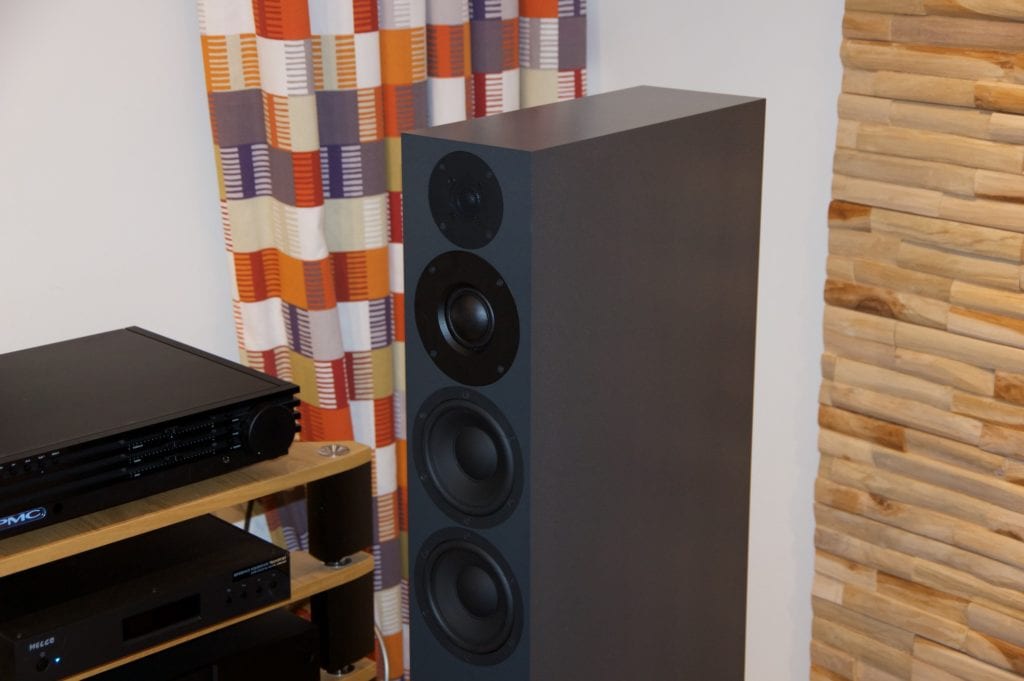 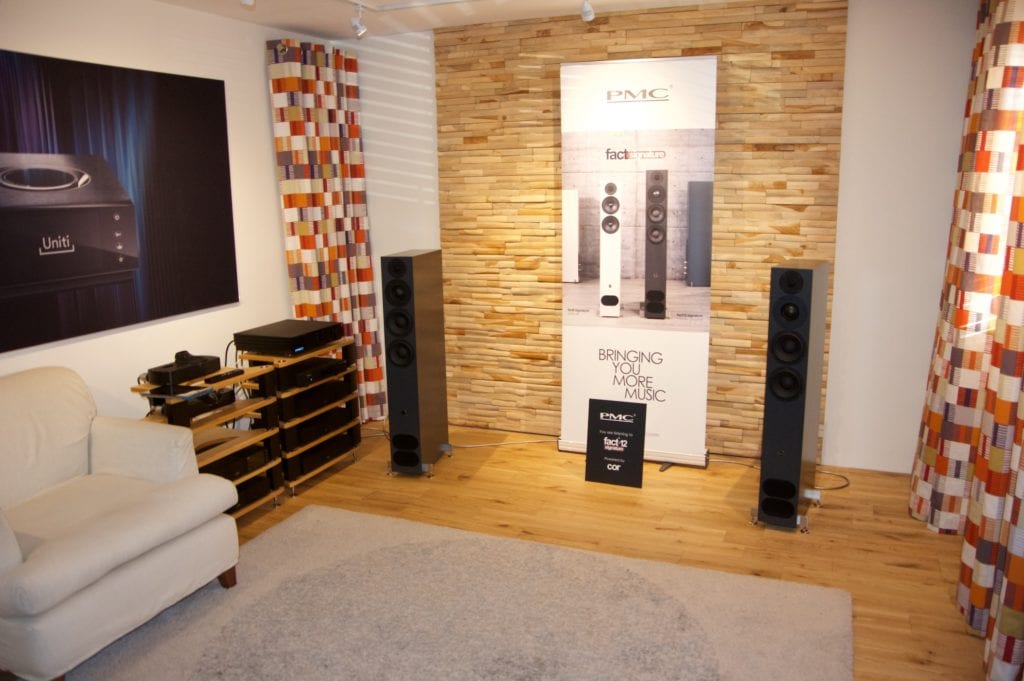 The new fact SEs come in just two finishes. Both are very slightly textured with a modicum of sparkle. The colours, or rather shades, are white or grey and both 8s and 12s were in the grey. It goes well with our paintwork. It’s meant! Somehow the darkish hue seems to shrink the scale of what were already compact loudspeakers.

The bulk of the changes are to the crossover with better components than before. It’s a little while since I’ve heard our previous demo fact 8s but I think I could recognise where the improvements have been made. The feeling is that the new SEs have a freer, cleaner, more open character with greater refinement. Same fundamentals as before but definitely a step forward.

Positioning in both rooms was relatively close to the wall. Very domestically acceptable.

Hifi shock number one was how stunning £15k fact 12s SEs are on a £5k cor amplifier, though. When we first heard the Cor at PMC’s Holm Court HQ, we got the impression that the fact 12s were a little much for the Cor to handle. Not a bit of it. This combo was fast and grippy with great resolution and enough spatial information to put players into meaningful space. Properly musical too. 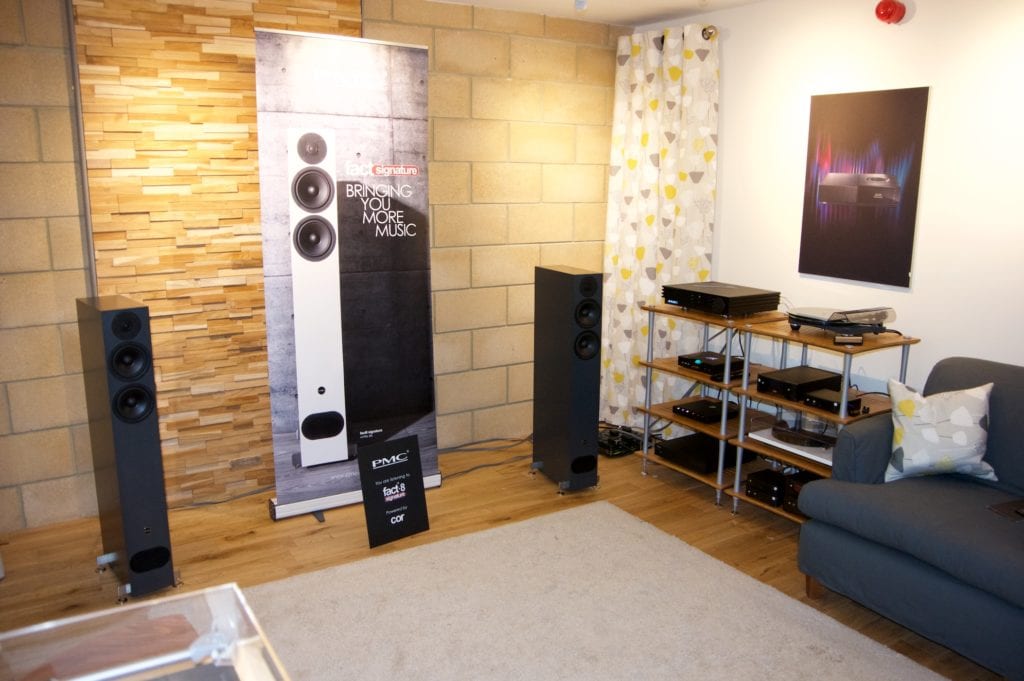 Pretty much the same could be said of the fact 8 SEs in the smaller ‘domestic’ room. A very happy combo. Speaker cables etc were kept modest. PMC don’t like to show off 🙂

HiFi shock number two (for the visitors) was the staggering effectiveness of the Quadraspire QPlus interfaces. These instantly improved musicality and gave far more insight. It’s just not right! Work of the devil. Feel free to ask to try some out.

I probably shouldn’t class spending some proper time with Peter Thomas as hifi shock number three but in a way it was. He really is a thoroughly likable individual with so much history to impart.

One of the joys of this industry is that many of the luminaries who have had a significant impact on what we hear are also down to earth, unpretentious human beings with just as much passion now as when they first got involved.

We had a thoroughly enjoyable, if long and fairly tiring day.

Thanks, guys, you did us proud!