For a long time we have been wanting to lay on some sort of musical evening. Two things have put us off : 1) our home base is not really large enough to absorb a significant influx of people and 2) hotels generally just don’t do it for us.

A happy coincidence of bright idea and the right conversation with the right person (thanks to David Train on this one) led us to Pipps Ford. A quick inspection by Andy and myself was followed by another with Mark
Ragget from Naim. We were all agreed that this venue gave us the right combination of relaxed atmosphere, domestic ambience and space to do something a little bit different. On top of that, ‘soft’ uneven timber framed houses of this type have always impressed us with their ability to allow audio systems to sound good.

We decided to use an alternative to Naim’s own loudspeakers partly because the rooms looked unlikely to allow near wall siting and partly to broaden interest to the non-naimies out there. Given the high level of involvement for all parties, we ran the event over two days in three sessions.

Our first piece of bad news was that the promised loan NAP 500 from Naim had been sold and its replacement might not be built in time for our event. Sadly, this prediction came true. To add to our worries, the demo Alto’s had also been sold and a brand new pair arrived with us on the Tuesday. Frantic running in with the speakers facing one another, out of phase on a mono signal for about 50 hours ensured that they were not too far away from ‘ready’ for the Friday.

We set up the large 555/552/300 system with the speakers either side of the huge inglenook fireplace and were rewarded with a sound that worked fairly well for about 2 or 3 people and appallingly for everyone else. As we walked round the room, the lumps and bumps in the bass, coupled with the inability to actually hear what the system was doing had us all pretty depressed. Bizarrely, whilst cable changes (that are normally quite dramatic) simply seemed to do the audio equivalent or rearranging deck-chairs on the Titanic, the CD555′ increased abilities always shone through.

Finally, well into the evening, we reached a compromise with the Altos facing across the room and the two Naim fraims squeezed into the inglenook fireplace. I genuinely believe that we heard better from them in our own listening room on a lowly 252 pre-amp, but the sound was more than adequate to allow listeners to hear the steps that Mark was going to demonstrate. Chris from Focal figured that we had reached about 85% of their potential. I should reiterate that our own hands-on with the Alto Utopia’s on home territory (again, with Naim electronics) impressed us much more. These are deeply impressive speakers with some amazing qualities in the right setting.

By contrast, the second system was quickly set up in the adjoining room and was left to fend for itself. A CDX2 was played with the 555 PS (and also with the XPS and occasionally on its own). It was connected to a NAC 252 and NAP 250.2 for the Friday and a NAC 282 / Supercap / 250.2 for the Saturday and was set up on a couple of Something Solid XR racks with the new Ace Spacedeck. The ‘old’ Space arm was used because the new Ace version arrived too close to the ‘do’. The Lyra Argo MC Cartridge was used and wiring was a single mains Nordost Valhalla to our own mains block and then Vishnu to the components. The interconnect from the CDX2  varied between Hi-Line and Chord Indigo and the loudspeaker cables were Chord Signature.

Frustratingly, a whole pile of Nordost Valhalla mains and loudspeaker cables failed to arrive in time (still somewhere with Parcelforce, as far as we can make out). These could well have proved interesting with the Altos. But then again . . .

And wiring is clearly a political issue. It  was best to stick to mains via ‘hydra’ and NAC-A5 to the speakers. It must be said that in the final siting, a quick switch to a (too short) pair of Chord Signature speaker cables gave mixed gains / losses (more open mid, less tight bass). It was not worth getting agitated about and we would have had to put in standard NAC-A5 cable at some point whatever. In any case, you can have too many changes to demonstrate.

I have a gut feeling that various support / cable strategies interrelate and the Fraim / Hydra / NAC-A5 route is a known delivery chain. Our alternative Nordost mains / Something Solid / Chord Signature route seemed to have its own synergy.

So how did it go? Well the event was likened by one wag to a fetishist’s convention (hence the headline) – but only in the nicest possible way! And nobody failed to spot that the CD 555 is a humdinger. In fact the whole Hi-line, then 555PS, followed by all out 555 sequence was absolutely persuasive. It was commented (by a Linnie in the midst) that the system sounded like the usual over aggressive Naim stuff until the point when the CD555 was added. Ouch. Conversely, the system in the second room actually sounded pretty good to him with the CDX2 front end.

He was certainly not alone in commenting that the ‘big’ system needed the CD555 to actually sound engaging. By the Saturday, this seemed less true, so maybe some level of run-in was taking place. Warm-up plays its part too, of course, although we had made every effort to make sure everything arrived on site already warm.

On our second system the Ace Spacedeck gave a good account of itself on both days. I think that the 282 / Supercap / 250.2 combo was actually a little more universal in appeal than the 252 – fronted system that we ran with (for some unconsidered reason) on Friday. Had we been using a NAP300, the 252 would have been in its element.

Certainly, the Electra 1027Be’s received a lot of favourable remarks and the relevance of the 555PS, the Supercap and the new Spacedeck were all shown, I think, quite clearly. The individuals making their own assessments certainly indicated as much.

There was almost a badge of honour developing as to who could clear the room – usually towards the garden – the quickest with the most outrageous music. All shall remain nameless but on the Friday evening at least, the most impressive hooligans were a couple of outwardly well behaved (and terribly nice) married couples playing records on the Nottingham on the ‘second system’.

In the end, the right sort of numbers came (42 in total over the two days), they stayed, they ate and drank and appeared to enjoy the experience. We were not standing by taking orders and did not expect any, but there are quite a few demonstrations being arranged on the back of the ‘show’.

Mark (Naim) and Chris (Focal) gave us an incredible amount of support which we very much appreciate. Thanks (for the umpteenth time) to them and to Christine and Simon at Pipps Ford for making it all so painless. At least it was for me, until I dropped our fraim . . 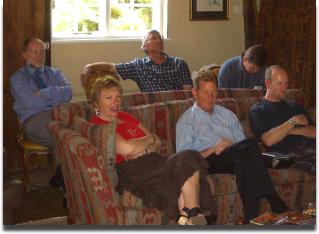 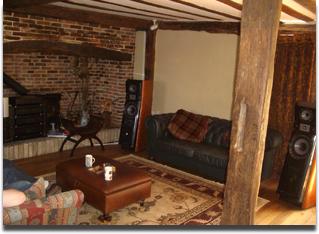 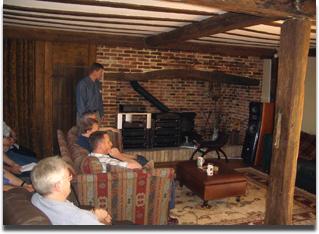 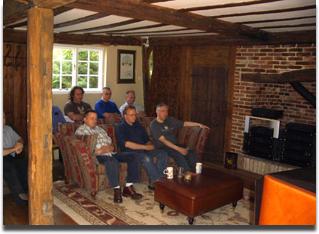